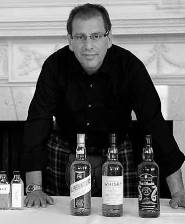 Ronnie Berri, is a Whisky Ambassador for the Scotch Whisky Experience, a fully-accredited Scottish Blue-badge Guide, and an Independent Whisky Consultant. He is also one of a select group of whisky-industry professionals to have been made a “Keeper of the Quaich” – an elite community of individuals recognized for their outstanding accomplishments in the world of Scotch Whisky. As a highly-respected speaker and whisky expert, Ronnie frequently conducts whisky presentations, tastings, and tutorials at international shows on behalf of the Scottish government. Recent engagments have taken him to Berlin, Vancouver, Kuala Lumpur, and Stockholm. He has also worked with private organizations such as Scottish Enterprise, the Scotch Whisky Association, Diageo, and Edrington.