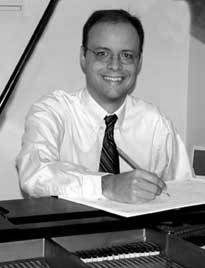 Ted Buehrer’s specialties lie in the areas of music theory and theory pedagogy, jazz studies, composition, and music technology. His work in music technology played an important role in the design and establishment of the music department’s state-of-the-art Music Computer Classroom. In addition to his classroom teaching, Professor Buehrer also leads the Kenyon College Jazz Ensemble. He maintains an active research schedule, recently completing his audiobook, How to Listen to and Appreciate Jazz, published by Recorded Books, LLC. Currently, he is finishing his work on a critical edition of one dozen big band compositions by jazz composer, arranger, and pianist Mary Lou Williams, which will be published by A-R Editions when completed. He has also been published in the Indiana Theory Review and the Annual Review of Jazz Studies, and has presented research at the national meetings of the Society for Music Theory and the International Association for Jazz Education. He was a 2006-2007 Fellow at the National Humanities Center (Research Triangle Park, NC), and was the 2002-2003 recipient of the Mrs. Giles Whiting Foundation’s Whiting Teaching Fellowship.

As a composer, Professor Buehrer has been published by the University of Northern Colorado Jazz Press. Additionally, he has collaborated with students and faculty in the Dance and Drama department, composing music to accompany Professor Jonathan Tazewell’s short film The Green Door and music choreographed for a Kenyon Dance Concert. He has also written a commissioned work for the Ohio Private College Instrumental Conductors Association that was premiered at their annual conference in 2002.